You are here: Home / Archives for hacked cars 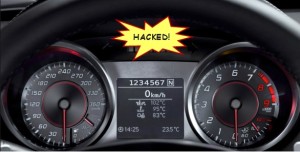 With the host of recent news media accounts of sophisticated hacks on all manner of cars, there is a sense of shock and surprise.

“Are you suggesting that my Jeep can start, stop and turn without me doing anything? Wow! When did this happen? Cars can be hacked?”

Well, actually this shift has been in motion for a while. We just haven’t paid any attention to it and it exposes a reality that is worth exploring.

However, to understand this,  first we have to understand that computers operate on code. Code is written by human beings in lines, just as this blog is written in lines. The computer then consumes the Lines of Code that then tell it what actions to perform.

Now, let’s look at a timeline:

Why are these Lines of Code important?

According to a Carnegie Mellon report, there are 20-30 bugs per 1 to 1.5 million Lines of Code. Do the math. When you have millions of Lines of Code, there are more mistakes and hence more bugs. Bugs make the code more vulnerable – more hackable!

The idea that software – even from the biggest companies like Chrysler, Toyota, Google, Microsoft etc. – comes with NO bugs, is an illusion. Some companies have understood that reality and are attempting to get ahead of this threat. These companies are no longer in denial. They include software giant Google that routinely pays hackers millions of dollars for telling them of bugs in their software. More companies are getting in on this crowd-sourcing model for exposing vulnerabilities in their software. Tesla, the electric car maker, is already upgrading and updating their cars wirelessly over the internet. But for all those that are attempting to correct the code, many more have very poor security practices in the writing of that code and shabby quality control. An entire cadre of attorneys is salivating at the prospect of suing all these companies for the pain they will be causing in the future.

United Airlines recently offered and then paid two hackers one million frequent flier miles each for spotting issues with their software. One million miles is the equivalent of 33 round trips from USA to Europe!

Daimler-Chrysler, BMW and Audi are buying Nokia maps for $2.7 billion. Dieter Zetsche, chief executive of Daimler, said a desire to have better control over data security was one of the reasons Mercedes was bidding for Nokia’s high-definition mapping business. Dieter wants the Mercedes to steer where the driver intends the car to go and in the new and fast approaching era of driverless cars – this will be even more important. By the way, the Lines of Code in driverless cars is expected to grow exponentially, as then will the bugs.

Computers run Lines of Code. Code is not perfect. And whereas imperfect code in your laptop may not kill you (although that may not be as simplistic as that statement suggests), the computer you drive and call a car, certainly can.